Martin Dockrell, Tobacco Control Programme Lead for Public Health England (PHE), has addressed the top seven myths about electronic cigarettes. Not only does it offer comfort to vapers, but it also gives the facts for any friends or family members who may hold reservations about your choice to switch. Ultimately, he explains how vaping is far safer than smoking and

Martin joined PHE in February after seven years working at Action on Smoking and Health. He has been a staunch advocate of harm reduction approaches to public health problems since the 1980s when he was involved in HIV prevention work.

“No doubt you will have seen some of the stories in the media,” he says. “E-cigarettes do seem to be a bit like Marmite, courting controversy among the public and media alike. Not surprisingly, there are lots of inaccuracies and misconceptions about e-cigarettes and vaping.”

He highlights that the media coverage of vaping is frequently “confused, and confusing”, but despite this, “there is growing consensus around the evidence. While not without some risk, when compared to smoking e-cigarettes are far less harmful.”

Martin points out that this opinion isn’t just his or PHE’s, it is one shared by Cancer Research UK, Action on Smoking and Health, the Royal College of Physicians, the British Medical Association and the National Academies of Sciences, Engineering, and Medicine. 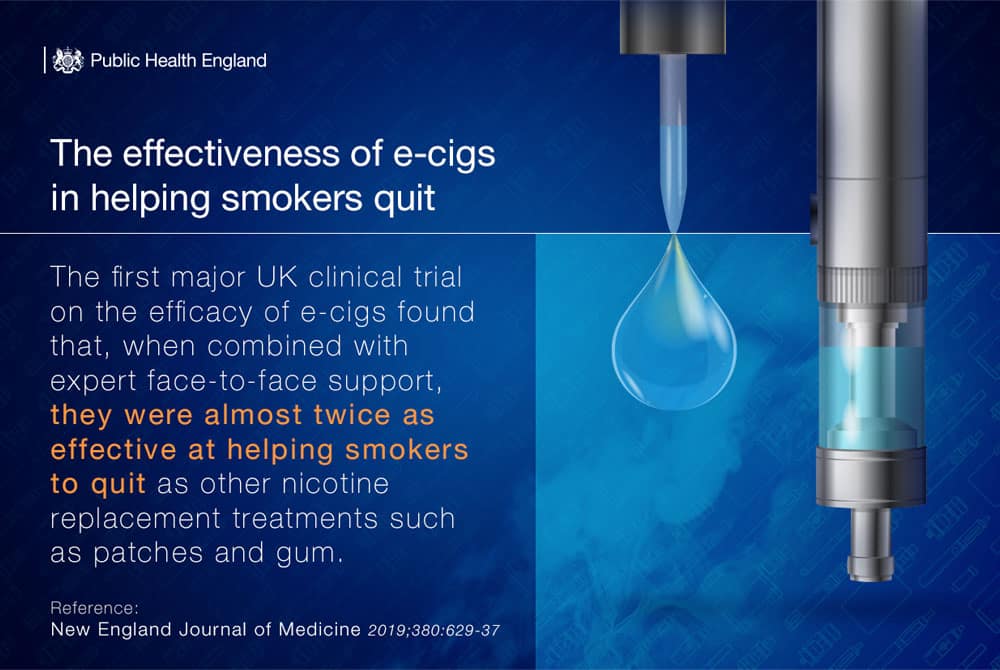 MYTH 1 – E-cigarettes give you ‘popcorn lung’

“One of the most commonly held concerns is that e-cigarettes might cause ‘popcorn lung’. This came about because some flavourings [that used to be] used in e-liquids to provide a buttery flavour contain the chemical diacetyl, which at very high levels of exposure has been associated with serious lung disease bronchiolitis obliterans. The condition gained its popular name because it was initially observed among workers in a popcorn factory.”

Diacetyl is banned from being used in nicotine-containing e-liquids available in the UK. Even when it was used in the past, it was only present “at levels hundreds of times lower than in cigarette smoke.” On top of that, not one single case of ‘popcorn lung’ has ever been diagnosed in smokers let alone vapers.

Martin swiftly points out, “the UK has some of the strictest regulation for e-cigarettes in the world.”

“E-cigarette products are subject to minimum standards of quality and safety, as well as packaging and labelling requirements to provide consumers with the information they need to make informed choices. All products must be notified by manufacturers to the UK Medicines and Healthcare products Regulatory Agency (MHRA), with detailed information including the listing of all ingredients.”

Because of our world-leading vape legislation, the United Kingdom has the safest products, the most regulated market, and the greatest success at using ecigs to combat tobacco-related disease – something our politicians are keen to build on.

MYTH 3 – E-cigarettes must be harmful as they contain nicotine

Martin adds, “E-cigarette vapour does not contain tar or carbon monoxide, two of the most harmful elements in tobacco smoke.  It does contain some chemicals also found in tobacco smoke but at much lower levels.”

MYTH 4 – Exposure to e-cigarette vapour is harmful to bystanders

“Unlike cigarettes, there is no side-stream vapour emitted by an e-cigarette into the atmosphere, just the exhaled aerosol. PHE’s 2018 evidence review found that to date, there have been no identified health risks of passive vaping to the health of bystanders,” Martin said.

Since 2017, PHE has found “no evidence” that e-cigarettes are a route into smoking among young people.

“There is also no evidence to support the assertion that vaping is ‘normalising smoking’. In the years when adult and youth vaping in the UK were increasing, the numbers of young people believing that it was ‘not ok’ to smoke was accelerating.”

PHE’s patterns and use in adults and young people update here.

“There is currently no evidence to suggest that e-cigarettes are encouraging people to continue smoking,” says Martin, “the picture in the UK suggests the opposite.”

Annual studies show that quit success rates have been improving and we’re seeing an accelerated drop in smoking rates due to people switching to vaping.

Martin points out: “a major UK NIHR funded clinical trial was published in February 2019. Involving nearly 900 participants, it found that in Local Stop Smoking Services, a standard e-cigarette was twice as effective at helping smokers to quit compared with the quitters’ choice of combination nicotine replacement therapy (NRT). Both groups were provided with behavioural support and those in the e-cigarette group had significantly faster reductions in cough and phlegm.”