Following on from the review of another of Vape Breakfast Classics lines French dude I am able to share another review with you all. This time I am going to be looking at the entire Pancake Man line. Vape Breakfast Classics are a company hailing from the USA and bring to the market various different liquids including the aforementioned lines and also unicorn cakes. Unicorn cakes I will be reviewing shortly after this review.

This was the first juice of the line and the first time I tried this was at Vapejam back in 2016. The smell from the bottle is a kind of strawberry and syrup mix. Taking this for a vape now, the inhale is exactly the kind of pancake taste I would expect and pretty close to the actual taste of pancakes. To be honest its one of the better pancake liquids I have had from any brand. Continuing with the inhale towards the end you start to get some strawberries. coming through. The exhale continues pretty much the same way as the inhale a nice mix of strawberries followed by pancakes. You also get a nice amount of creaminess added in that goes really well. Then at the end, a layer of syrup of comes in. At times the syrup can be rather sickly but for the most it is ok. Overall this is a nice juice. Plenty of richness to the flavours and as a pancake liquid its pretty spot on.

There was a long gap between the original and deluxe appearing, I was not expecting another in the line, to be honest. But along came Pancake Man Deluxe and the flavour profile sounded right up my street. When I had the chance to review this line this was the first one I went for to see if there was an improvement over the original. Deluxe always suggests better to me.

The smell from the bottle was a distinctive cereal mixed with some pancake notes. The inhale starts just like the original with the easily recognisable taste of pancakes. The similarities end there though, following the pancakes quite closely comes some fruit cereal flavours. Like fruit pebbles but they have not gone over the top with this flavour in particular. Fruit pebbles in the wrong amounts can kill any chance of tasting anything else in a liquid. Thankfully this is not the case here. The exhale is fruit pebbles first and the pancake is a little more subtle underneath. This is now accompanied by a nice creamy vanilla ice cream. This adds more cream here than the original and is really good. Along with the creaminess, the ice cream sweetens the citrus notes from the fruit pebbles down. All the way through the exhale is an element of syrup that creeps in and out of the taste. Much nicer than the original and nowhere near as sickly. At the end of the exhale you are left with a very subtle marshmallow taste that leaves you almost with a sugary taste on your lips.

This is a massive improvement on the original liquid for me. Many more flavours to taste and make it a far more interesting and enjoyable liquid. 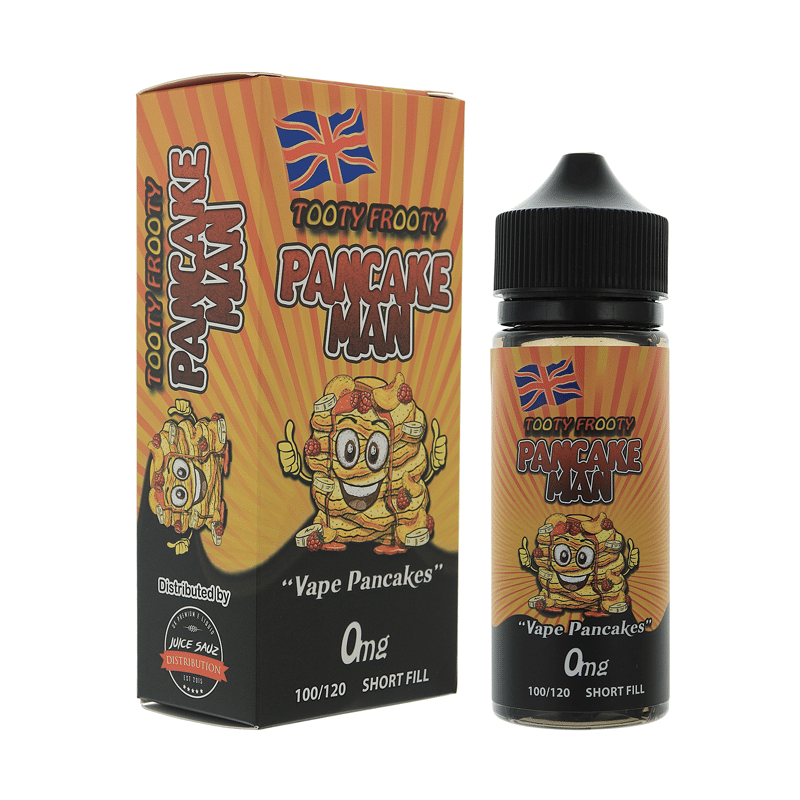 This is the latest release of the Pancake Man line. The smell from the bottle is a mixture of fruits, I get more of a peach smell here. The inhale is pretty much predictable now, the same pancake notes from the original that are quickly broken down by a banana flavour. Whilst easily recognisable as banana I would not say it is the nicest banana I have had recently. The exhale is banana pancakes and next comes raspberry, which is actually nice and mixes well with the banana. However what follows next kind of spoils it for me. The peach from the smell of the liquid comes in and just adds a strange taste to the juice considering the other flavours. Personally, I would have left it at the banana and raspberry the peach does spoil it for me. Underneath all this fruitiness is a nice layer of creaminess. But unfortunately, even the cream does not manage to turn my opinion of this juice around.