Hey everyone, it’s about time I gave my thoughts on this line of liquids. Especially since one of them, in particular, I have vaped constantly for well over 18 months now and still have not blessed it with a proper review. Loaded E-juice is a line manufactured in Southern California by Ruthless. Ruthless as you know if you have tried any of their liquids never fail to disappoint when it comes to the quality of their flavours. So this should be no different right? I first came across Loaded when I was about 9 months into vaping and did not actually realise that it was made by Ruthless until I bought my first bottle. In this review I am going to be reviewing the following juices; Glazed Donuts, Smores, Strawberry Jelly Donut & Cookie Butter.

You can purchase all of the liquids I have reviewed in this post from the main site at the link below. All juices are made to a ratio of 70VG/30PG and are available in the following sizes. 10ml, 30ml (3x10ml), 120ml (12x10ml) and 120ml (0mg) The 10ml bottles are TPD compliant and both these and the multipacks are available for Glazed Donut and Smores. Whereas Strawberry Jelly and Cookie Butter are only available in 0mg 120ml bottles.

It is important to note that the 120ml bottles are not suitable for adding nicotine shots too as they are full bottles rather than short fills.

You can purchase directly from here. 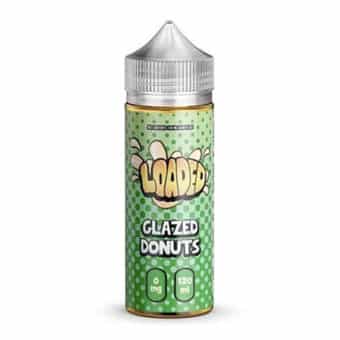 Right, this is where it all began for me back in April 2016 at VapeJam in London I came across this liquid. I had seen it on Instagram getting rave reviews and never fell for the hype of buying without trying this one ( I got burnt when I fell for the I Love Donuts hype ! ) One inhale later and I bought 3 bottles and have vaped it ever since.

First things first, the sniff test. You get a satisfying hit of donut with a slight cinnamon. I have vaped this in all sorts of tanks and drippers over the month but sticking to my trusty Godria Bolt RDA for all of these reviews. Inhale is a stunning donut flavour with a very subtle hint of cinnamon. The exhale is very much the same but the donut comes out a little more. This is a super smooth liquid and the balance of flavours is absolutely spot on. I have found that out of all of the donut liquids I have tried this is one I will come back to time and time again just for that perfect flavour and this still ranks as my overall favourite liquid of all time. For that reason, I always have a bottle of this on the shelf. Glazed donuts by Loaded is a rather simple juice, no complex blends and in some senses, the flavour is quite delicate. But I love the stuff!

The only downside to this juice is that after a couple of tanks you need something to revitalise your tastebuds a little otherwise you become used to the flavour and it almost mutes itself. 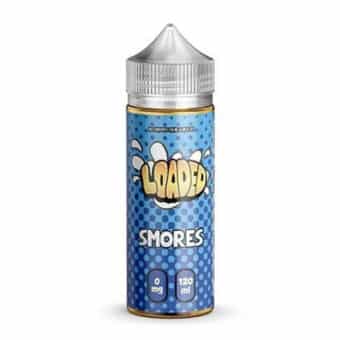 Smores was the next release from Loaded and I do not think it had the same hype about it. With that said given the success of glazed donuts I did treat myself the day it came into stock.

The smell you get from this is pretty much chocolate and not much else. On the inhale I get a nice biscuit and a slight cinnamon towards the tail-end of the inhale mix this in with some chocolate. The exhale is much more about the chocolate, its a nice creamy chocolate and a very smooth vape. Underneath this are the undertones of biscuit and the cinnamon is still noticeable but again it is very subtle. Right on the end of the exhale is where marshmallow comes in. It adds a satisfying sweetness and lingers on in the aftertaste. There is a lot more going on in this juice than the glazed donut and which makes it a lot more complex and adds to the whole vape experience.

This did not give me the same level of satisfaction as the glazed donuts. However, it is a really enjoyable juice to vape. I do still buy this from time to time when I fancy something a little different. Since I tried this the first time I have tried other s’mores liquids and this one is the best of the lot that I have tried. 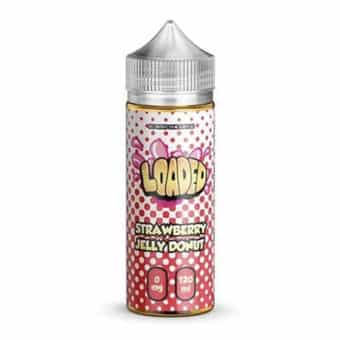 Browsing Instagram one day I saw a picture of this pop up on my feed and a real sense of happiness came over me. Sad I know! I was really excited to get the chance to review this and hoped to relive those initial wow feelings I had when trying the glazed donut for the first time.

Smelling the open bottle I am hit with a very strong strawberry. Getting on with vaping this fast like a kid at Christmas I could not wait! The inhale is all round strawberry rather strong, very sweet and does not leave room for much more on the inhale. The exhale you start to get undertones of the donut but these are very much drowned out by the strawberry. Sometimes I notice more donut coming through like it is reminding you that it is actually there. At first I was a little disappointed but then I thought back to the original glazed donuts and remembered how delicate that flavour was. Next thinking about an actual jam doughnut and how the strawberry jam becomes the dominant taste. I soon came to the conclusion that this juice was as intended and started to enjoy it all the more. I find it tastes best in the Kylin or a tank. This does help tone the strawberry down and allows the donut to come through a little more.

In short, really enjoyable, but could do with a little less strawberry. 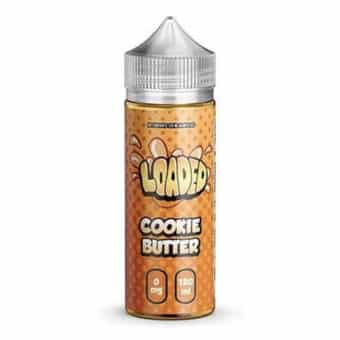 This was another of the latest liquids to come from Loaded and the one most likely to impress me as much as glazed donuts. I have tried all sorts of cookie juices. From a simple cookie through to snickerdoodles. I have enjoyed most of what I have tried to be fair.

Opening the bottle I am reminded more of snickerdoodles ( cinnamon cookie type things ) and this was a really pleasant and inviting smell. On to the dripper this went. The inhale, WOW, this hit the spot. You get a very sweet cookie with cinnamon notes. More cinnamon than in s’mores or glazed donut. This is one tasty juice and I have not even exhaled yet. On to that the exhale brings out the cookies more than the cinnamon and undertones of a nut. This part with the nuts is incredibly subtle but adds a really nice finish to a juice that could hold its own up against glazed donut. A big statement that, but this could well find a regular slot on my shelf with the glazed donut. I have powered through the 120ml bottle in little under a week which not many juices have that effect and would normally last me a lot longer.

Loaded E-Juices the company that keeps on giving. A really well-crafted line of juices with some firm favourites in there. I do not think of out these current juices that I have reviewed that there is a flavour I would not recommend. It is always good to see a company pushing out consistently good juice.

My favourite of the line is, of course, glazed donuts closely followed by the new cookie butter. But wait…. something new is brewing, I am hearing whispers of a new Loaded ejuice called lemon bar ( watch this space )