Is it possible to vape and drive? Is it included in the ban on smoking in cars? What can the police do to people who are vaping while driving?

In 2015, Parliament passed a law that banned people from smoking in cars if they contained a child. Some wonder if this means vaping is also banned and if they are likely to get stopped by the police. The actual law received a lot of criticism from the police and was sporadically enforced although some e-cig users said they had been stopped.

The Conservative party justified the new law by saying that the lungs are particularly vulnerable in children and, because they breathe in and out more quickly, they are more at risk of issues with their airway and immune systems from secondhand smoke.

They celebrated the measure as being a “landmark in protecting children”.

A representative of the Devon and Cornwall Police wasn’t quite so enthusiastic, describing the legislation as “poor”, not thought through, and “very difficult to enforce”.

The law entailed the banning of smoking from any private vehicle that contained at least one child. It applied to the driver or any other adult passenger, holding the driver responsible for the actions of that passenger.

The police were then allowed to stop the vehicle and issue a £50 fixed-penalty notice, but they were allowed discretion to issue a warning at the roadside instead. 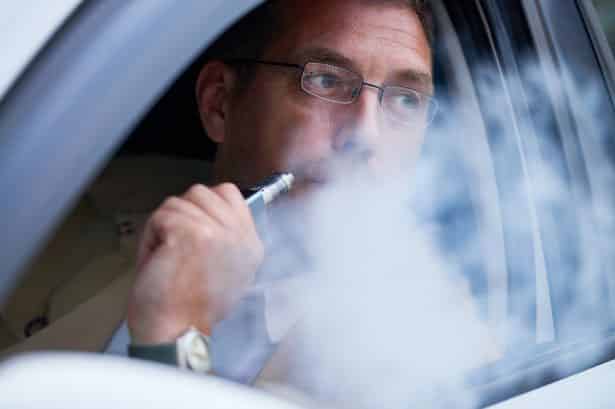 After a year of the law being in place, just three of the police forces in England and Wales had stopped any vehicles, leaving thirty-nine of them not bothering with enforcement. Of those stops, all were to issue cautions and no fines were handed out.

Over the intervening years, vapers have reported on social media that they have been stopped – although none have said they received a warning.

This doesn’t mean that vaping is always fine when driving. Although it isn’t illegal to use an electronic cigarette even if there is a child in the car, there are times when the police may see vaping as a contributory factor in the breach of other laws or at fault for an accident.

Vaping can be considered distracting if the volume of exhaled vape obscures vision out of the windscreen or mirrors. Also, fiddling with settings or refilling the tank could lead to a drop in concentration on driving.

Sergeant John Davis commented: “Any person who is distracted in any way could be guilty of an offence – whether that be smoking, vaping or eating.”

Sergeant Carl Knapp added: “The smoke caused by vapes are a distraction and the consequences of them can be dire, all it takes is a moment to become distracted and potentially cause a crash and even worse, a fatality.

Here at E Liquids UK, we sell a wide variety of e-cigarettes that are very discrete and could be used stealthily in the car as they do not produce much vapour but still give the nicotine hit you desire. Reach out to one of our friendly customer support staff to learn more about those devices.